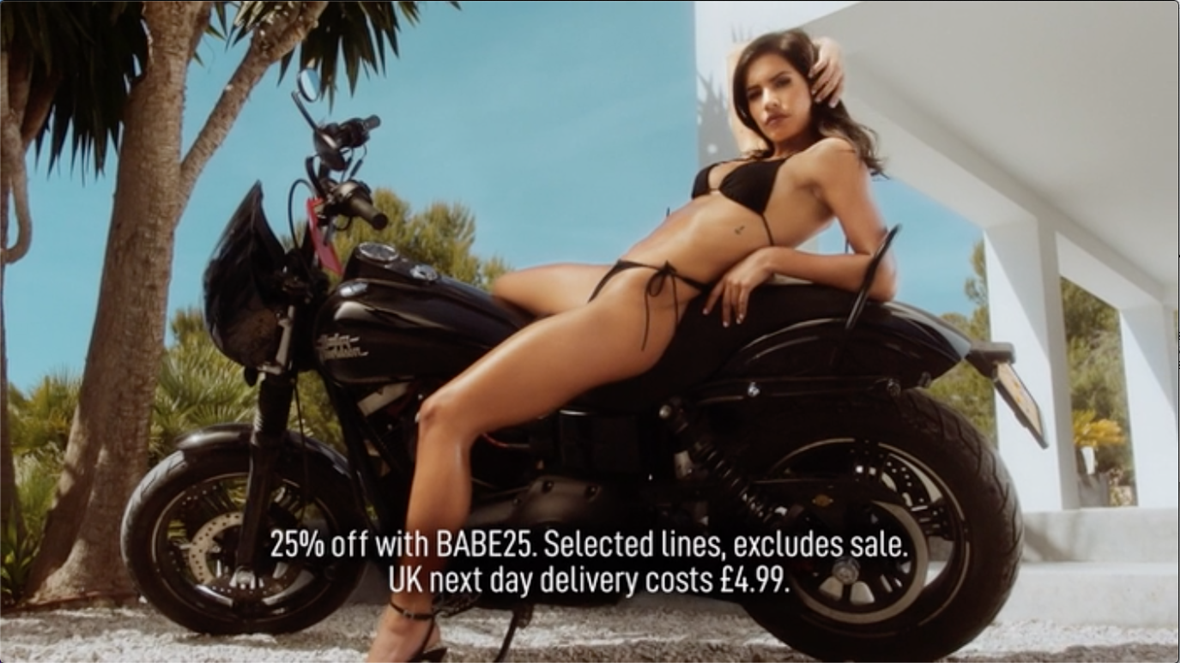 MullenLowe Open’s Frances Griffin believes that brands need to move with social attitudes as they change. Frances’ thoughts below.

Boohoo and Missguided ads have been banned for being “highly sexualised” and not “socially responsible”, prompting questions about the imagery and messaging fast fashion uses to sell product to young shoppers.

They have been defended as simply showcasing clothing in its “natural environment”, but last week the Advertising Standards Authority (ASA) banned two advertising campaigns for objectifying and sexualising products aimed at young shoppers.

Boohoo and Missguided were juded to have breached new rules on harmful gender stereotyping that came into effect in June – prompting a debate about the imagery and messaging used to promote young fast fashion.

A video on demand (VoD) ad from Missguided that was aired on ITV Hub during Love Island on 14 June. The ad showed young women in swimwear with the slogan, “If you plan on wearing clothes this summer … We’ve got you covered … kind of”. The ad showed young women on a beach with their legs apart, a woman running her hand up her inner thigh, a group of women in thong bikinis and another woman reclining in a bikini with her legs astride a motorcycle.

A separate marketing email by Boohoo in July depicted a female model wearing a beige jacket with the words “Send nudes” and an emoji of eyes.

The ads received complaints, in the case of Missguided that the tone of the advert was overly sexualised, and in Boohoo’s case that the reference to “send nudes” was socially irresponsible.

Missguided declined to comment to Drapers but told the ASA it had tried to promote “a particular lifestyle rather than just clothing” in its swimwear ad. However, the ASA ruled the Missguided ad was “highly sexualised” and “sexually suggestive”.

On Boohoo the ASA said “send nudes” was likely to be understood as “referring to requests for sexual photos, which could be a form of sexual harassment”. Boohoo also declined to comment. However, in response to the ASA it said the word “nude” was solely used to describe the colour resembling that of the wearer’s skin.

It added: “We note the ASA’s ruling and recognise our obligations to ensure that advertising is socially responsible.”

The judgments by the ASA have led to questions about whether the regulator has taken – or should take – a stance that goes beyond protecting the public from misleading adverts. This revolves especially around the young, often under-18 audiences targeted by fast fashion brands such as Boohoo and Missguided.

The rulings were criticised by some in the advertising industry, who deemed the ASA to have taken its remit too far.

However, Anne Rose, associate in the commercial team at law firm Mishcon de Reya, argues the ASA is implementing a ban on harmful gender stereotypes in advertising that came into effect in June. It outlaws gender stereotypes that are “likely to cause harm, or serious or widespread offence”.

“Both Boohoo and Missguided had ads banned for ‘objectifying women’ and being ‘socially irresponsible’. I think that we shall see a trend towards more complaints to the ASA that particular adverts are socially irresponsible and overly sexualised in relation to both men and women, especially when the target audiences could include young people.

“Culture is changing. The wider question is whether advertising should reflect culture or lead it. If its role is to reflect culture, we’ll see harmful stereotypes stop being effective in advertising as they become unacceptable in the wider culture. If its role is to lead culture, then the ASA is saying that these stereotypes are harmful now even, and is betting that it’s ahead of the cultural game on that.”

James Corlett, partner at law firm Fieldfisher, believes the rulings caught the advertising industry by surprise: “Looking at the decision made in the summer, some in the industry have heavily criticised the ASA for its interpretation of the new rules and guidance.

“Even Clearcast [a non-governmental organisation that pre-approves most British television advertising] has not necessarily completely agreed with the approach. That’s left retailers in a slightly difficult position, as they need to be more cautious to not fall foul of the new rules. In broad terms, it seems the rulings go further than most in the industry anticipated.”

“The wider question is whether advertising should reflect culture or lead it” – Anne Rose, associate in the commercial team at law firm Mishcon de Reya

One former ASA investigator states that the body has a record of taking a stand on issues such as sexualising products or objectification: “This is an area they’ve been interested in for a while and they have been consistent in upholding complaints like this. The ASA was upholding complaints against American Apparel, whose adverts were prime examples of objectification and voyeuristic ads.

“The ASA are prudish, but at least they’re consistently so, and they’ve forced the industry to raise their standards.”

Frances Griffin, senior strategist at marketing and consumer activation agency MullenLowe Open, agrees that brands will need to move with social attitudes as those change: “As people’s interests change, fashion retailers continue to echo those changes in their own visual branding – especially in social advertising.

“The ASA’s stricter rules exist to ensure that a line remains between retailers joining public trends, and retailers potentially endorsing irresponsible behaviours or values. Some would see the ASA’s bans as over-sensitive – in the industry, it should be viewed as an opportunity to create new ways to engage audiences without reverting to outdated stereotypes.”

Is fashion being singled out?

The recent rulings on fast fashion brands may look like the ASA has taken a particular interest in the sector. However, the authority has been mandated in the past to effectively “clean up” the advertising standards of entire industries.

Of particular pertinence is the way the alcohol industry was first targeted, and transformed its marketing after decades of advertising linking sexual “success” with drinking.

The former ASA investigator says: “People now think it’s crazy to link alcohol with social or sexual success in ads, but go back to 2005 and almost every alcohol ad was like that.

“Bacardi had footballer Vinnie Jones walking into a bar, buying a Bacardi and suddenly two women are hanging off his shoulder. It was objectifying and saying to people that drinking was sexy. The government called on the ASA to look into the alcohol industry, and afterwards it had to be more creative.”

What do the rulings mean?

The question now is: do individual rulings set a precedent for future conduct?

Matthew Wilson, media and public affairs manager at the ASA, says the rulings alone do not set new standards, but should be considered as part of a continuing process: “The rulings in question don’t set a precedent, as such.

“Rather, they remind advertisers that ads should be prepared in a responsible way and particular care taken to avoid causing potential harm to children/young people.

“Judging whether an ad is irresponsible involves, of course, a degree of subjectivity. However, key to our decision making is taking into account the medium and context in which an ad appears, the product being advertised and the audience that’s likely to see it.

“We also take into account prevailing standards in society – something that is informed by our research with the public on where they think the line should be drawn.”

Retailers and brands are taking notice of the ASA rulings and adapting accordingly. MullenLowe Open’s Griffin says many are introducing new review practices and increasing due diligence of their existing processes in a push to decrease the risk of irresponsible promotions.

“Let’s be clear: brands needing to show responsibility for their advertising is not a trend. It will continue to grow in importance into the new decade, and brands that do not conform will continue to be called out.

“This is not a case of skirting around the subject. Brands and retailers alike should adapt their fundamental values to reflect those that they are expected to hold from the people buying their products.”