It’s been one year since MullenLowe Group UK was drafted into a ‘war room’ at the Cabinet Office to work exclusively on pandemic comms, hand in glove with the UK government. The agency’s Covid response team reflects on their experience and how they kept on the pulse of the public mood.

Over the past year, MullenLowe Group UK has sat at the heart of the national crisis, steering the UK public throughout, offering guidance and support. It was there when we stayed at home and when we ’helped out’ by eating out, and it will be there when we get the vaccine.

“It was so high profile. For a long time, we were the massively dominant advertiser,” Knox admits. “Every time you looked to a newspaper or turned on the telly, there it was.”

And the mission is far from complete. With the UK government setting out its roadmap from now until late June (when things become ’normal’ again), last week the team launched ‘Let’s Keep Going’ ahead of some vital incoming vaccine work. After that, “the next phase will be – how we get people to actually leave their homes,” muses Katie McCambley, joint head of account management.

“On my social channels, I see a lot of people who are very nervous about going back to normal because we’ve become so used to living this way.”

As so as we reach the year milestone, the response team reflects on what working on the most important campaign in recent British history was really like. How did an agency that normally resided in the crux of hipster Shoreditch get drafted into a government ’war room’ tasked with churning out Covid comms while most of us stayed at home?

“The first time I could find a reference to coronavirus in my inbox was in the first week of February,” recalls Knox. As the long-term ad agency for the National Health Service (NHS) and the Department of Health and Social Care, the agency was the natural choice to lead the covid comms campaign.

“Then things happened very quickly. Almost immediately, I found myself in the Cabinet Room with (former chief of staff) Dominic Cummings explaining the launch campaign of hand hygiene message. It was apparent straight away that this was absolutely the top priority of the government and that they were going to be rigorous about researching everything,” remembers Knox. “And it all snowballed from there.” 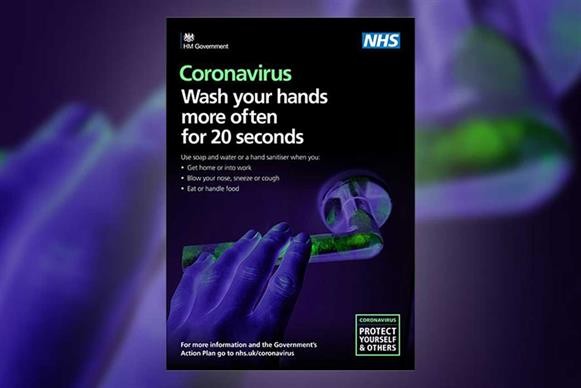 Recognizing they needed to work from the heart of the action, when the rest of the office world was clearing their desks, the response team were settling into their ’new normal’ – working from the Cabinet Office alongside MG OMD, Freuds, 23 Red and MMC. During the year, they also set up a mini production area, with a design studio so they could tap into that resource.

“And so, on and off, we’ve been working from there ever since. In an extremely unglamorous corner of it. We’re surrounded by metal lockers,” shares Knox. “And that led to a very close and efficient working relationship with all the clients because we were right there.”

On the pulse, McCambley explains how the cross-government communications hub allowed them to work hand in glove with the government. “Sitting close with the client, in essence, we were writing the briefs together,“ she explains. “They’d go, ’so there’s this thing we need to communicate’ and we’d go okay how best can we do that. Then we would battle it out together.”

Streamlining the process to a tee throughout the year, she details how research has been a lifeline to the team, as they worked to stay on the pulse of a public mood that was as volatile as British weather. Working with qualitative research agency Britain Thinks, she explains it would pose online discussion groups throughout the week, “building up an excellent understanding of public attitudes towards the virus. It’s very quick to sense when things are changing and how.” The team also received quantitative research through Kantar, which had a tracker on public mood, that would raise an alert if there was any whiff that the public was over it, so they could adapt their comms accordingly.

The luxury of working on such important comms meant the team received research twice a week, which meant they could research strategic thoughts on a Tuesday and then be researching creative ideas on a Thursday. “That’s how quickly things were turned around. And everything was researched within an inch of its life because it has to be. Also had quantitative research through Kantar – had a tracker on public mood, alert if there was any whiff that the public was over it – adapt appropriately.

With a production area nestled right beside them, Trudy Waldron, MullenLowe Group UK’s director of integrated production explains how the team was able to respond quickly to the brief. “From presenting production partner edits to signing off budgets, it was a very swift and fluid process – way more than a normal production timeline,” she shares.

Bringing in producers and editors to work specifically on Covid, she recalls how throughout the process, the more work they produced: “the more familiar and formulaic it became. We adapted at each point – but flexibility and being agile was really key, as well as having clients that were very swift and sensitive to our needs.” 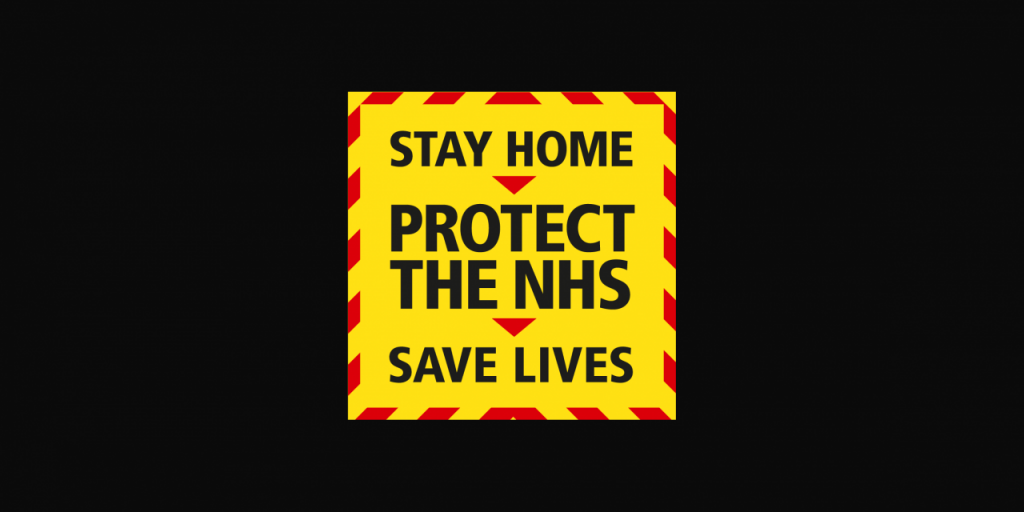 “Right at the beginning, we were really nervous about whether or not people would comply with the first ’Stay At Home’ message,” admits Knox. “There was a lot of uncertainty, especially from the behavioral scientist community about levels of adherence, particularly over time. Would people get fatigued? We started off very instructional, but we’ve been working very hard throughout the year to be more empathetic.”

Knox recalls their “breakthrough moment“ when the team realized “people’s propensity to comply with the restrictions correlated with the extent to which they regarded covid as a risk”. The issue was, people began doubting the seriousness of the situation, questioning whether hospitals were really full, spurting misinformation that everything was a hoax, that everything was fine.

“With ‘Look Into My Eyes‘ we were deliberately more empathetic, acknowledging that this is a hard thing that we‘re asking people to do – specifically targeted at those who thought the risk was exaggerated,” he explains.

And the result was so effective, it resulted in loads of complaints to the Advertising Standards Authority (ASA). “We were slightly amused. Most of the grounds for complaint was that the advertising was exaggerating the threat of coronavirus, which is of course, insane.”

But things have not always gone to plan. Back in May, the UK government and MullenLowe were widely mocked for the ‘Stay Alert‘ messaging; the work inspired a number of memes. It even featured on the front of The Big Issue. “It was a phase that came under a lot of criticism at the time,” Knox reflects.”And that was frustrating for us because it got leaked in advance. It was in that period where there wasn‘t any policy change, people were staying home. And we always knew ‘Stay Alert‘ was a long-term thing.

“Funnily enough, at the same time, the French government were running practically the same language, which nobody in the press talked about.” The moment provided a solid case for the importance of research and ensuring the comms reflected the public mood.

“Throughout the whole thing, you have to develop a slightly thick skin,” Knox admits. “From our point of view, you have to disentangle – are they criticizing government policy or the comms? We are not the government, and it‘s not up to us to decide what‘s the right thing to do. We learned to bite our lip because I remember being upset by the way ‘Stay Alert‘ was misrepresented and it actually worked out really well, in the end.”

Knox acknowledges the pressure the team faced, in the knowledge that they were openly spending taxpayers‘ money at a moment when is propping up the economy. Between MullenLowe Group UK and MG OMD, the government has spent more than £184m on Covid comms this year, and people will naturally scrutinise whether it was worth this much money. “There‘s still quite a big focus on value for money and making sure that we‘re not being wasteful,” he admits. 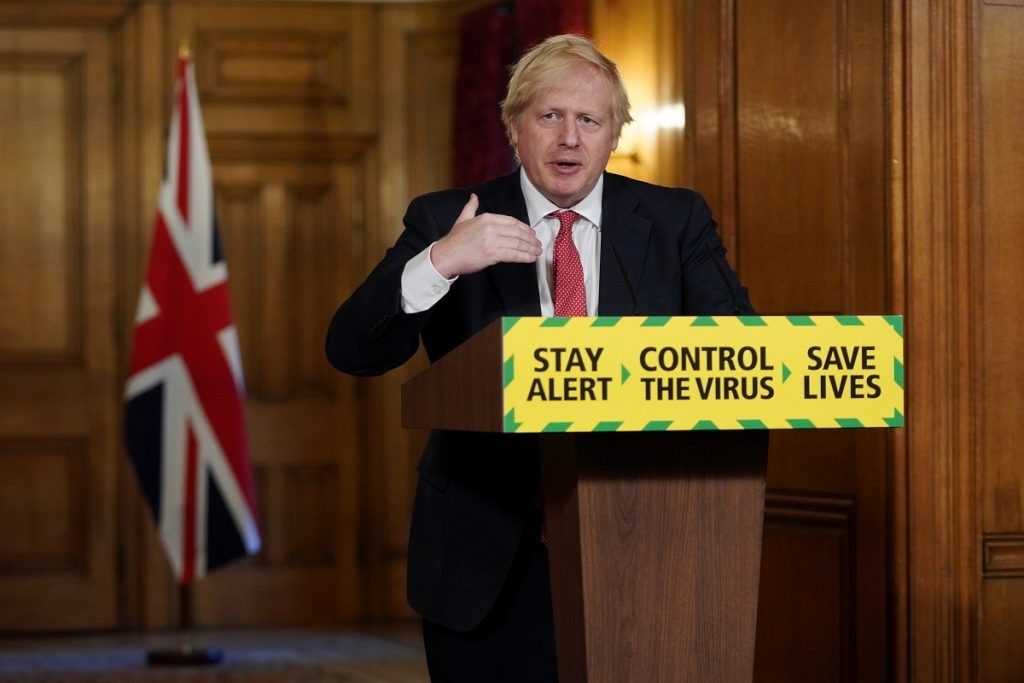 Covering every channel possible, from newspaper to print, to TV and radio, even taking advantage of the government‘s various social channels, MullenLowe Group UK‘s work has tried to appear at every touchpoint. But perhaps the most iconic placement was the press conference podiums. “It was a bit of an afterthought,” recalls McCambley. “We thought that it might be a good idea and it ended up being an amazing piece of infrastructure which we have totally relied on to communicate which period we‘re in ever since.”

Reflecting back to the handwashing comms last year, the team never imagined it would still be working exclusively on Covid comms. Naturally a little pessimistic, Knox says by the middle of summer sometime around July or August, he started to realise that the second wave was going to happen, which meant the whole of winter. “But to be honest, I never thought we‘d be where we are now,” he asserts. “We‘ve learnt a lot along the way, mainly that it‘s best not to be too definite with the virus because we‘re still learning about it.”

But, as the UK and the rest of the world reaches this final stretch, the team will go back to agency life back in its Shoreditch base. “We‘re all worried about what going back to normal work is gonna be like because we‘re going to be very impatient,” Knox laughs.

“We‘ve got used to going from no brief to on-air in under two weeks. I was talking to a client the other day, and they said something about advanced booking deadlines, and I was just like, what are those?”

This article was originally published on The Drum