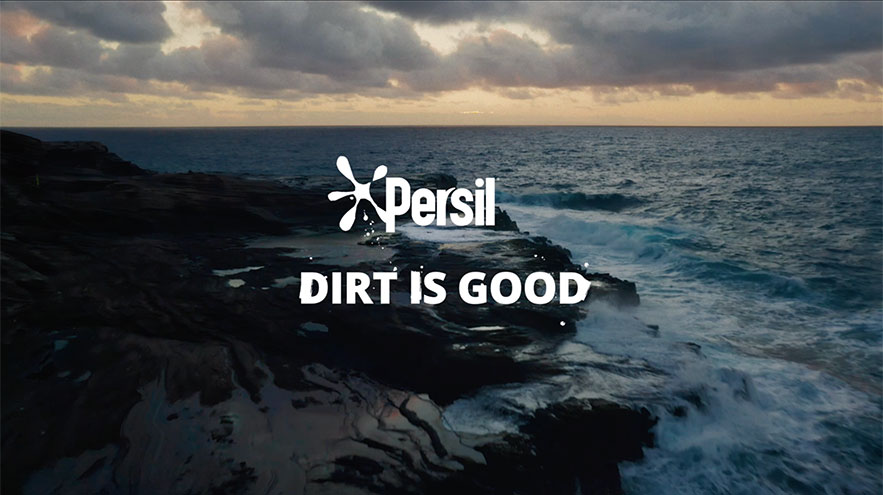 Unilever’s vice-president of marketing for home care, Tati Lindenberg, explains why the flagship detergent brand is evolving its ‘Dirt is Good’ campaign as part of a strategy designed to tout the FMCG behemoth’s environmental credentials.

At 12 years old, Unilever’s ‘Dirt is Good’ platform is a rarity in modern marketing: a campaign with real endurance that has transcended continents and mediums.

Attached to Persil in the UK, and similar Unilever brands across other markets, since 2008 ‘Dirt is Good’ has woven a narrative of significance into the category, which was previously confined to highlighting how fast grime and stains could be removed in the washing machine.

The slogan has helped build Persil into one of Unilever’s biggest brands (with its value pitted at $3bn globally). However, the FMCG giant has spotted an opportunity to bake greater purpose into the platform, by dovetailing with a promise to spend €1bn changing what it puts in its laundry and cleaning products to cut out ingredients made from fossil fuels.

As part of its parent firm’s ‘Clean Future’ program, Persil bottles are now 100% recyclable and made with 50% recycled plastic.

The brand is also looking to source 100% of the carbon in its cleaning and laundry product formulations from renewable or recycled sources by 2030.

Unilever’s vice-president for home care marketing, Tati Lindenberg, was part of the original team behind the slogan – but even she concedes it is time for a change.

“Although people love the idea of ‘Dirt Is Good’, the way we’ve been executing the purpose has been a bit shallow and out of touch with reality.

“It’s always been about individual kids benefiting from getting dirty,” she says, pointing to the fact that the creative has come to be synonymous with one young protagonist doing “something heroic” and reaping the rewards of freedom and discovery.

After doing some research earlier this year alongside creative agency MullenLowe, Persil realised that kids could no longer relate to the images presented in the ads.

“We got stuck two generations back somehow. When we look at the [popularity and impact] of someone like Greta Thunberg among young people, we can see that kids now want a voice and contribute to the world and society in general.”

The result is ‘Real Change,’ which sees Persil take on the new ethos of ‘Dirt for Good’ in a global campaign designed to communicate its brand purpose and the action it’s taking on the environment.

Through a series of assets from 10-second product shots to 70 second-hero films, the campaign will go live on TV, VOD, OOH, social and display throughout the remainder of the year across 40 markets.

In its various guises, Lindenberg says ‘Dirt is Good’ is seen by 1.6 billion people a year (“a bigger reach than Instagram”).

Unilever has been planning this shift in product manufacturing and positioning since August last year.

When Covid-19 hit, the brand considered switching strategy again, but Lindenberg said that Unilever’s in-house ‘people data centres’ – which combine social listening, CRM and traditional market research – persuaded her team that it should stay on course.

As well as making culls to its agency roster and mixing up the way it works with advertising networks, Unilever has been investing heavily in its own data to build out the muscles of its direct-to-consumer strategy and speed up product launches.

Amid the pandemic, Lindenberg says that these hubs are becoming ever more vital to the brand in helping it map out its next move.

“During Covid, [they showed] how fundamental it was for us to step up our hygiene communication,” she says, adding that the data they were seeing at the height of lockdown has persuaded Persil to launch a new range of products focused on killing germs that will hit shelves “in the next three months”.

For the ‘Real Change’ campaign, the brand is partnering with schools and NGOs over the next year to educate kids on how they can act for good when it comes to the environment. A key KPI will be how many children are reached.

“We have a target of working with 10 million young environmentalists. We want those kids to become advocates towards the environment. This is about a change in society and looking beyond our business’s books.”

Lindenberg’s sentiments around brand purpose are also aligned with those of Unilever’s own chief exec Alan Jope, who said last summer that he would eject any brand without purpose from the firm’s portfolio.

This article was originally posted in The Drum